The UK Government is acting to support fairness and expanding the EV charging network as the sales of Electric Vehicles continues to grow at a pace.

The move now towards EV’s across the commercial ‘vans’ alongside cars is accelerating and whilst driving range is expanding, we all need the traditional 350-450 range for a ‘tank of petrol’.  The government is going to act to break the monopoly on electric car charging at motorway services to help.  Apparently they will use legislation to ensure the points are reliable and can be accessed by anyone with a contactless card to help expand the EV charging network.

Currently just one company has the contract to provide charging provision along the motorway network.  The move is aimed at updating the existing infrastructure and optimising reliability and the predictability of longer journeys for EV drivers.  Whilst a good eye for investing in the future should be rewarded, and they took the plunge as the market was maturing, the monopoly and costs seem now to be a barrier.  I think it could be time to rethink a business plan.

Speaking exclusively to Electrifying.com, the Transport Minister Rachel Maclean said new chargers would arrive before 2023, with at least six at each service area on motorways and legal powers used to ensure they were reliable and accessible.  This will make a huge difference to help expand the EV charging network around the UK.

The most frequently-asked question of the minister was around the planned strategy for rapid charging on the motorway network. Maclean said: “We do believe it will take government investment to ‘charge up’ this market. So we’ve got nearly £1 billion to upgrade those connections at motorway service stations. What we are going to have is at least six high power chargers in every motorway service area by 2023.”

She then went on to clarify that these would be “obviously reliable” and would be 150kW or above “to allow you to charge your car in the time it takes you to get a cup of coffee.”

The chargers would have to be available to anyone with a contactless payment card and would be in addition to Tesla units which are already installed at most service stations. Larger sites will have up to 12 new points providing speeds of up to 350kW.

Service level agreements would ensure that the points were working for at least 99% of the time, drivers would have access to 24/7 customer care and there will be clear pricing information available. If these standards are not met the government would use legislation to enforce them.

The expansion would not stop at these charge points, explained the Minister, paving the way for the ban on sales of new petrol and diesel cars: “By 2030… we are going to have around 6,000 of these rapid charging points across A-roads and motorway service stations.”

Maclean said: “We want the private sector to come in and we will take the best commercial offer. Now we have set out our strategy this is an attractive area for investment. This will drive an increase in performance.” 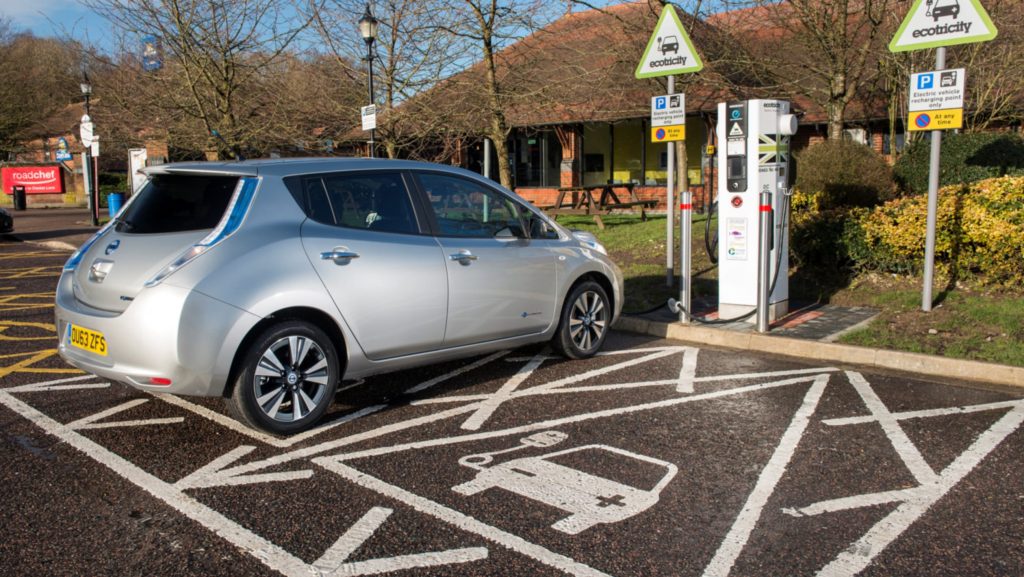 The move has been welcomed by industry experts. RAC spokesman Rod Dennis said: “This is great news as charging electric cars at motorway service areas needs to fast, reliable and easy to pay for so drivers can make longer journeys with the minimum of fuss.

“Nothing is more frustrating to an electric car driver than the sight of an out-of-order charge point, so the fact that there will be a commitment to having chargers ‘in service’ will make a big difference. The promise of clear pricing is also important as drivers are used to knowing what they’d be paying before filling up, thanks to petrol price ‘totems’ on forecourts.

“It should also go a long way towards showing would-be EV drivers that ‘range anxiety’ is a thing of the past, further speeding up the switch to electric.”

It’s not just the rapid charging network which will see investment, said Maclean. “We have doubled the funding available to local councils to improve charging infrastructure. What I would say to anyone listening to this who thinks ‘I haven’t got one near my house’ is to get in touch with your local council. We in central government have made this money available but some of it is not being spent, which is a real shame.”

The Minister also urged electric car drivers to help shape the future policy by contributing to the public consultation into the consumer experience at public charge points.

In addition to the consultation, Maclean announced that she would be writing a monthly blog for Electrifying.com in the run up to the 26th UN Climate Change Conference (COP26) scheduled to be held in Glasgow in November, to enable her to understand what support consumers need as the UK heads towards 2030.

If you’ve got EV, charging or other electric motoring news, or need help with an installation or maintenance of your EV charger, get in touch.

With a growing range of cars with expanding ranges launching, improvements in the network of EV charging installation is needed.  If you need advise or need a EV charger installed, we operate around the north of England so talk to Steve today.