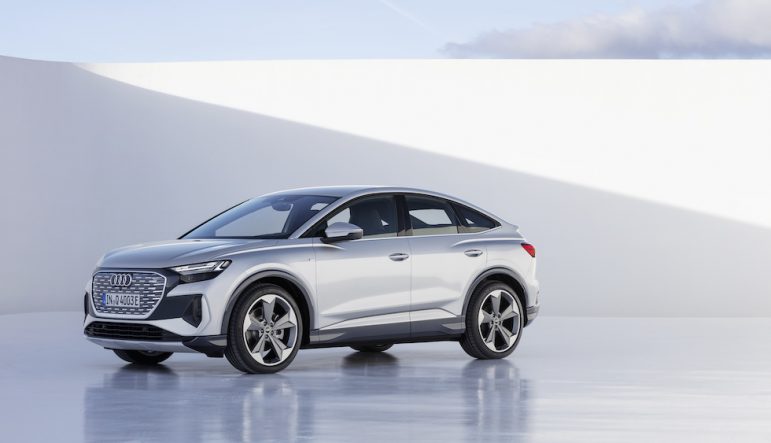 Sustainable premium mobility takes another significant step towards becoming the rule rather than the exception this week as the all-new Audi Q4 SUV goes all electric with the e-tron and Q4 Sportback e-tron cascade the benefits of full electrification into the Audi compact SUV family for the first time.

Conveying the progressive design of the concept cars into series production with minimal alteration, the all-rounders will be offered in the UK in conjunction with Sport, S line, Edition 1 and Vorsprung trim options, and with a choice of two battery variants and three drive configurations capable of WLTP-certified driving ranges of up to 316 miles (Q4 40 e-tron Sport). They will also provide space in which to go the distance in a fully digital cabin that visually and technologically reflects the Q4 e-tron’s position at the forefront of automotive development. Its forward-looking specification incorporates fittingly ingenious technology, including a pioneering augmented reality head-up display connecting the virtual and real worlds in a totally new way.

Detailed solutions, on which the Audi aerodynamics experts have worked closely with the designers, provide further gains in range. At the front, the narrow vertical bars below the headlights channel the airstream smoothly along the vehicle’s side, resulting in a three-mile range uplift, and a minute step on the exterior mirror housings known as the turbulator edge allows the airflow to swirl in a targeted way, which is good for another mile. The 19-inch Aero wheels with their flat designs also facilitate low-loss air flow, notching up an additional three miles, and even the tailgate seal plays its part. Designed to handle the pressure conditions generated by the roof edge spoiler, it adds just over two more miles to the range. All these tweaks make a difference to bring a good range for a bigger EV.

“The compact SUV has long been the go-to model type for many drivers, so I’m delighted that we are now shoring up our already strong position in this vital segment with two new additions that are not only paragons of good design and space-efficient packaging, but also standard bearers for the wider integration of fully electrified drivetrains across our range,” commented Director of Audi UK Andrew Doyle.

“Combining attractive price points, impressive charging performance and the potential to travel in tranquil comfort for well over 300 emission-free miles between stops, the Q4 e-tron models make the case for switching to sustainable premium mobility more clear-cut than ever.”

Audi’s next step: the design

With the Q4 e-tron and the Q4 Sportback e-tron, Audi is introducing the next step in its design language for electric models. Like the 2019 concept cars that they so closely resemble, the new compact SUVs boast striking proportions accentuated by their short front overhangs and large wheels emphasised by muscular blisters, and by a surface treatment that is clear and pared back but also intersected by super-precise, high definition lines. In the Audi Q4 Sportback e-tron, the especially low coupé-style roofline ends in an expressively designed rear where the spoiler sits deep on the two-part window.

As we have come to expect from Audi, the design gives appropriate priority to functionality and aerodynamics: The Q4 e-tron achieves a drag coefficient of 0.28, and the Sportback gets to an even lower figure, with a drag coefficient of 0.26. A key contributor to these impressive figures is the main section of the bodies, with their glasshouses drawn in sharply towards the rear. The adjustable cooling air inlet in front of the radiator and compressor is another important factor. Supplied by the central lower air inlet, its electric louvre is opened if the major assemblies require cool air, such as when the vehicle is charging, but remains closed in the majority of situations to minimise energy losses caused by air flow through the narrow cooling ducts, adding around four miles to the overall driving range. Three-dimensional spoilers in front of the front wheels also optimise the airflow, adding almost nine miles to the range, and a partial covering for the control arms of the rear axle gives another boost of just over two miles.

On the Q4 Sportback e-tron, the spoiler sits much lower on the split and steeply raked rear window, and as the area in which the air swirls as it comes off the vehicle is restricted to the zone beneath the spoiler that area is significantly smaller than in the Q4 e-tron. This not only highlights the unique design of the SUV coupé, but also enhances its range by around 7 miles while also reducing the lift on the rear.

Quick HPC charging: enough power for about 80 miles in ten minutes in ideal conditions
Quick and easy charging is another strength that ensures daily use of the Q4 e-tron and Q4 Sportback e-tron is as undemanding as possible. Depending on version, they feature a 52 kWh or 77 kWh battery which can be charged at HPC (high-power charging) stations at a charging capacity of up to 100 or up to 125 kW respectively. At 125 kW, and in ideal conditions, the battery can achieve an 80 percent state of charge from a 5 percent starting point in 38 minutes. WLTP testing has confirmed that the Q4 40 e-tron**, which uses the larger battery, can recharge enough electricity – again in ideal conditions – to cover a distance of about 80 miles (WLTP) in around ten minutes, and can achieve a range of up to 316 miles.

Using the myAudi app, owners can activate charging remotely using a smartphone. The app also provides access to the comfort remote preconditioning system, which enables remote adjustment of the cabin temperature and seat heating functions to ensure that the cabin climate is always comfortable well before a journey begins.

Electric motors and electric all-wheel-drive
At the entry-level, the Q4 35 e-tron and the Q4 Sportback 35 e-tron use the compact battery with its net energy content of 52 kWh (55 kWh gross*), and combine this with an electric motor offering an output of 125 kW (170 PS) and torque of 310 Nm. In both body variants, this is sufficient for 9.0-second 0-62mph acceleration, a governed 99mph top speed and a WLTP-certified range of up to 208 miles on a full charge in the SUV (Sportback range data to be confirmed).

Both model variants tackle the 0-62mph increment in 6.2 seconds and continue to a top speed of 111mph. Driving ranges of circa 295 miles are expected for UK versions of both models subject to confirmation following WLTP testing.

For maximum efficiency: coast or recuperate?
When the Audi Q4 e-tron is on the move in gear D (drive) and the driver releases the accelerator pedal, the drive system switches to coasting mode. Both electric motors – or the rear motor in the rear-wheel drive models – run freely and largely without energy. Coasting takes priority, because it is the most efficient, but if the driver prefers recuperation they can switch to gear B (brake), in which recuperation is almost always prioritised when coasting. If “dynamic” mode is set in the standard Audi drive select dynamic handling system, recuperation also takes place in gear D but at a slightly reduced rate.

The shift paddles mounted on the steering wheel in Edition 1 and Vorsprung versions and optionally available for all others enable the driver to select three different manual recuperation levels in position D. Aternatively, automatic recuperation is configurable via the MMI system.

When braking, the rear electric motor performs the deceleration alone in the majority of everyday driving situations. The quattro models can brake electrically at up to almost 0.3 g, equivalent to a recuperation performance of up to 145 kW. The electric brake booster only activates the hydraulic wheel brakes as well if greater deceleration is required. The transition is almost unnoticeable, and recuperation remains active almost until the vehicle is at a standstill. The quattro models prioritise recuperation on the rear axle but also use the front electric motor in certain situations.

Sustainability in the spotlight: SUVs with a CO2-neutral footprint

Avoid, minimise, or offset unavoidable emissions: Audi produces the Q4 e-tron and the Q4 Sportback e-tron with a neutral carbon footprint at the Zwickau plant using eco-electricity, while the battery cell suppliers are also required to use only green electricity in their production processes. Emissions that cannot currently be avoided are offset by climate protection projects certified by the German technical inspection association or TÜV. They meet the strict requirements of the Gold Standard Foundation.

Together with its suppliers, Audi is firmly and systematically committed to acting responsibly in all vehicle projects. Since 2017, the company has been reviewing its partners using a sustainability rating developed in-house to ensure resource-saving production processes and adherence to social standards.

I’ve always been a fan of Audi’s, I’ve owned a couple over the years and have enjoyed the drive and many untroubled miles in them. With the power of the VW group behind them, Audi, like the rest of the group, are pushing electric vehicles in a big way. Its great to see. I look forward to a test drive on this one when it comes out.

If you’ve got EV news, need help or an installation for an electric vehicle charging point, get in touch with Steve